A downloadable game for Windows

You're a snail trying to escape the grasps of an evil AI. It predicts your next moves and places traps in real-time.

Quite a challenge! The question is...

It's winter and the AI wants to celebrate Christmas and New Year's Eve.

There will be presents and fireworks, but not for you...

WASD or Arrow Keys or Game-Pad

If you enjoyed this little demo, make sure to add the game to your wishlist on Steam so you don't miss the launch:
https://store.steampowered.com/app/1115050/Will_You_Snail/

Hey jonas can you show us the game stats on itch

This game is really good even though I suck at it. I'm really hyped for the steam release. I made a video on this game! So Enjoy!

It was so funny how when I knew I didn't want to play anymore because I kept dying, I continued playing because I really wanted to beat the level. Pretty brilliant game! I might even buy the game sometime soon :

Hey, thanks a ton for playing. Yeah, it's definitely a bit intentionally frustrating I guess... :P

If I can describe this in one word its AWESOME! I saw your live stream where you played it played it on impossible... I had 158 deaths on casual lol. This is awesome, and I CANNOT WAIT until Will You Snail comes out! Thank you very much :)

Thank YOU very much for playing. Glad you enjoyed it! :)

I'm actually not too much for platformers, as I was a kid in the 80's and 90's where platformers was all we had, so I have played my part (don't even want to think about how many restarts I have had of "Alex Kidd in Miracle World"!) Anyway, Will You Snail really feels good. The controls seems very nice, combined with the sounds. Haven't played a lot yet, but the game really feels nice and funny :)

Oh my god, this is awesome! The AI was by far the best part of this experience, followed closely by the controls. Cannot wait until the steam release. Wish-listed!

Thanks a lot! Appreciate it. :)

But which language is used to create this game ?

Super awesome game but it is a bit confusing that you can walk through the spikes without dying and the AI didn't talk as much as i hoped can't wait for full release.

Nice. Thanks a lot for trying it out. I definitely have to strike a balance for how much the AI talks. I'm afraid too much talking would become annoying as well. :D

I managed 51 deaths at casual difficulty.The controls were good, but it wasn't clear to me that you can walk over the spikes but not fall on them. Perhaps dead snail bodies can also become part of the level.

Yeah. I see. I removed that mechanic for the final game. It was too hard to understand and didn't really add anything new to the mix. Thanks a lot for testing. :)

This was awesome! 93 deaths on casual, is that good? Haha, it progressed really good and I was so annoyed when the AI seemed to predict where I was going and shooting fireworks instead of my current location. BTW I played it on my Mac! I used CrossOver and had an awesome 60fps experience. :D

The dying particle effect was very satisfying, I'm sure, I saw it 93 times, and 2 more on the "Thanks for playing" screen, hehe. -niclas @bluegoogames

Thanks a lot for testing it out. 93 on casual is a pretty decent score. Good job. :D

I mean, i hate it but i like how it's written!

I LOVE THE AI

EVEN WHEN IT TAUNTS ME

HE IS SO FUNY

gah its so evil...great game though. i keep having red text at the top of screen telling me framerate is low despite it averaging at around 60

Oh, that is strange. Will probably remove that stupid text in the final game. Thanks for playing. :)

Nice. Thanks for playing and thanks for the feedback. Both of that is already in the version I'm currently working on. ;)

This game is good! how did you do the snail?

Thank you. The snail animations are coded. The snail consists of multiple parts all with their different behaviors. The shell just leans to the left and right when moving to the sides and gets stretched vertically when jumping for example. :)

You can even die on the Thank You For Playing! screen.
It's a solid game.
Though the icicles could have had a little bit of signaling that they will fall.

Thanks for your feedback. Yeah, the icicles can feel a bit unfair at times. :p

Awesome game! Loved it. Also, how did you make  the game not have the folder with all of the assets, and made it into a "data.win" file???? (I use GameMaker Studio 2)

Thank you. Unfortunately I have no idea how I did that... There are only a hand full of export options so I assume it shouldn't be to hard. Also it might have something to do with the sound settings. Not quite sure.

use python or java

use python or java

It is so cool. I love the AI. Its voice is awesome and annoying at the same time. each part has its own unique surprise elements. I couldn't wait for the full version!

Nice! Happy to hear that. Thank you.

I like it! the controls are solid, visuals are good, difficulty is hard enough but not too hard. The voice acting wasn't the best, might make it more enjoyable if you have some more pauses in the sentences? overall really solid! cant wait for the full game :)

Thanks for the feedback on the voice acting. Hope I'll be able to lift the quality of that for the final game.

Really good and solid demo! I like the AI mock the player. :)

Hehe. Thanks for playing and the feedback! :)

Everytime I start the game it automatically moves to the left and doesnt let me do anything :S I dont know whats wrong with my computer but I cant play it

Thanks for reporting that bug. Can you tell me which screen resolution you're playing on?

uhm I restarted my Computer and now it works....I have no Idea what was different

I had a lot of fun playing it, too bad there isnt a full version of it yet, but there are some things that seemed unfair.  Of course its only my opinion and if you think the game is fine the way it is,  its fine too. The room where you encounter the presents, in the end of the room, you cant jump out of the view, even though there is no ceiling. So I would add a Ceiling there or allow the Player to move outside of the view or room or whatever you want to call it,  until gravity pulls him in again.  And the second thing is the lethal snowflakes. I had a hard time seperating them from the normal snowflakes, I didnt even notice why I kept dying in the introduction-room for the snowflakes. To me it seems like an unfair way of setting the difficulty higher but again these are just my opinions,  And the last thing I wanted to say is, to me the fallspeed seems just a tiny bit too quick or maybe its just the hitboxes of those spikes in the ground, but I kept dying because I thought i wasnt going to get hit and I wanted to use my double-jump a little bit later. I hope the Feedback is helpful to you, I love platforming games, I even play these Kaizo Mario games so I like to believe that I have some idea of what a precise Platforming, Ragegame should be like.

Oh and this is the best run I have played so far, a quite addicting demo.

Thanks for your awesome feedback! It is highly appreciated! I think the game will always stay a bit unfair. The difference to other rage games is the random nature of this game. Muscle memory doesn't necessarily help you in this one, because every attempt is slightly different. I agree that some of the factors are too unfair, though, (e.g. snowflakes) and I'll try to eliminate stuff like that for the final game. :)

its really hard but still.... 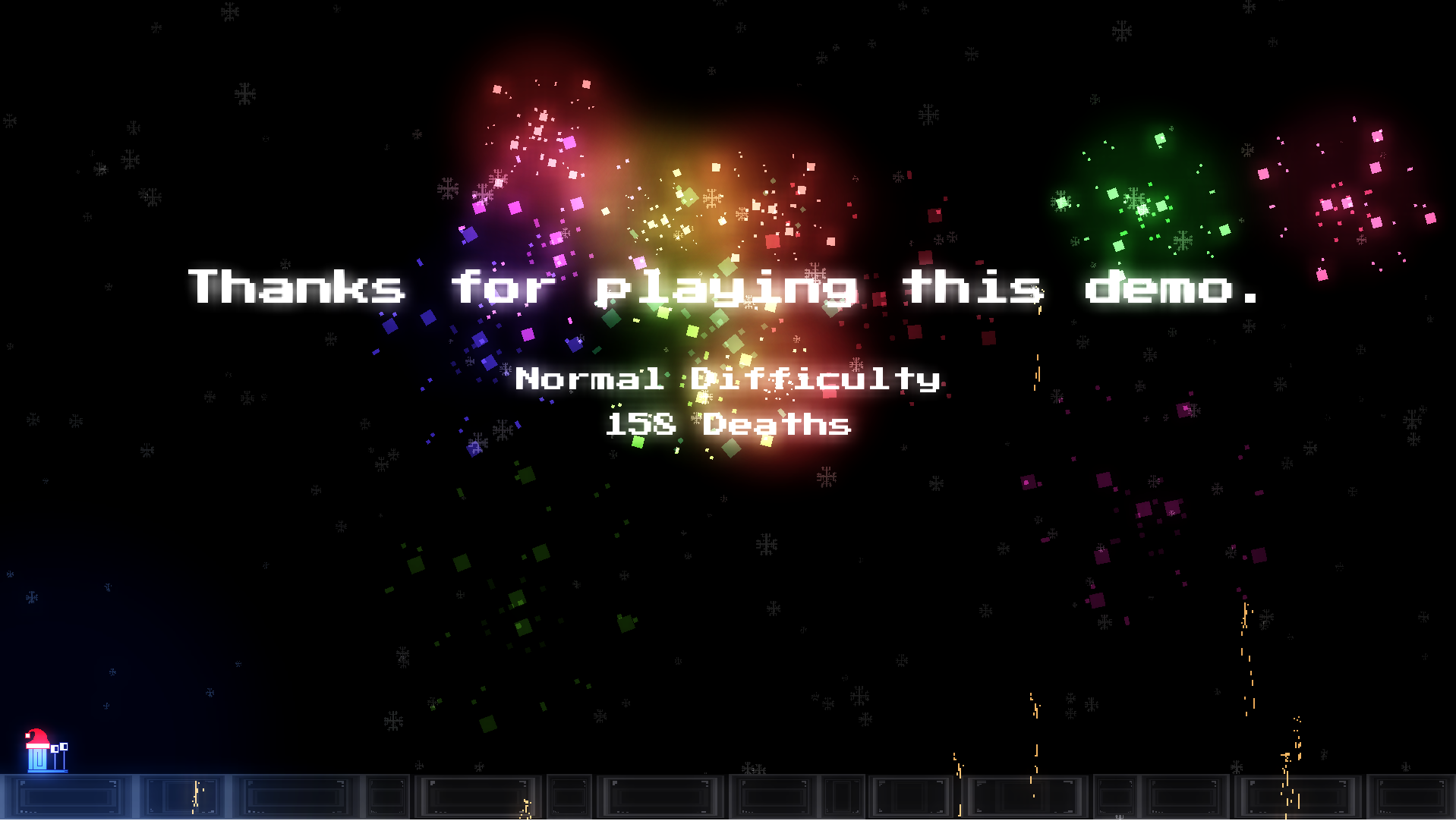 Not bad for the first run. Yeah, I think it's possible to figure the icicles out. Thanks for confirming. :)

This is a really great game, i cant wait for the full release :D

Glad to hear it. I'll try my best.

its really nice and i really love that annoying talkative AI

Good job and thanks for giving the game a shot! :)

dang... this is actually pretty  fun! this game is awesome.  the first level is already hard and the graphics is already AMAZING , even that AI, gosh the voice acting is  annoying, mean, and fun to listen to. also did you make the soundtrack? >.>

Yes, I made the soundtrack. Thanks for boosting my ego. Appreciate it. :D

Seems sort of unfair to me, occasionally spikes would appear for instance in a line right in front of the exit, at which point there isn't really anything I can do since I obviously can't jump down to there but if I stay on the playform a spike will appear there soon enough as well. Obviously this is harder to program, but fewer, more cleverly placed spikes would be better than large numbers in obvious roadblock configurations. That said, the visuals are awesome and I quite like the AI character (although I guess he's not terribly unique). Excited to see where this goes!

Thanks for the feedback. You're right, it's definitely unfair. You can pretty reliably beat the first level when you're willing to backtrack a little bit, so I don't necessarily see that issue in the first level. In later levels for sure. :D

Having a "smarter" algorithm for spawning spikes would be great. I'm afraid I won't be able to pull that off, though. It's a rage game, so hope it's gonna be fine, but I'll keep an eye on it...

It looks great: the visual, the sounds and the music. Its awesome.

Just make the handcap  more faster because this game is like dark souls, or even more difficult than. Haha. Good luck. <3

I'll just add difficulty settings.
Thanks for your feedback. :D <3

You realy should enable to disable that Handicap Function...

Luv it controls and sounds fell so gooooood he...hehehehehe

It was to easy for you? Okay. He...hehehehehe 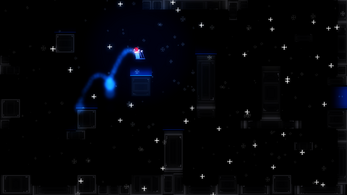 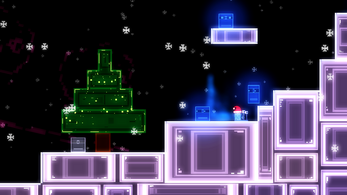 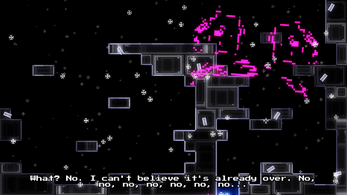 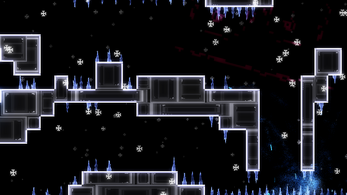 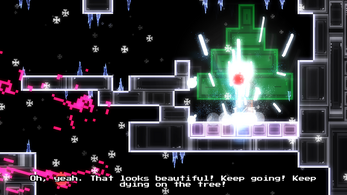 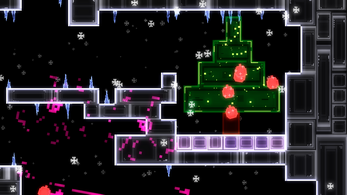 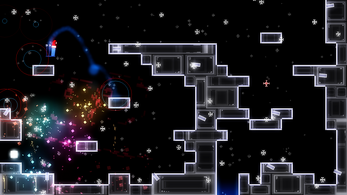